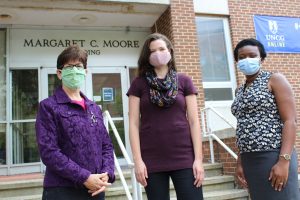 Dr. Colleen McGovern, Dr. Crystal Epstein, and Dr. Forgive Avorgbedor joined the UNC Greensboro School of Nursing as assistant professors. Their innovative research ranges from examining the effects of stress or hypertension on pregnant women to the ways children cope with asthma. Read below about what led them to their individual work.

Avorgbedor met a mother at a park and listened to her heartbreaking story about losing her baby.

She was also invited into women’s homes to hear similar stories about infants dying from health conditions that were likely preventable.

As a McNair Scholar at the University of Wisconsin-Milwaukee in 2012, Avorgbedor interviewed grieving mothers in Racine, Wisc., for the Fetal and Infant Mortality Review. The program was established to identify health and social issues in a community that could lead to infant mortality.

Some of the mothers who spoke with Avorgbedor had saved their baby’s ashes. They also showed her photographs of their children and their tiny feet shortly after they were born and before their conditions got worse.

“I wanted to understand their story, what happened, how did it happen, and I also realized that the women had complications like hypertension and diabetes before they lost their babies,” Avorgbedor said. “So, from there, I became interested in research. I wanted to find more.”

Avorgbedor’s research can be emotionally taxing and require the new UNCG assistant professor to get out of her comfort zone and spend time in someone else’s safe place.

She looks at women who have experienced complications with diabetes and hypertension while pregnant. She examines the biological, social, and psychological conditions that affect their health during their pregnancies and postpartum.

Avorgbedor was introduced to the topic while taking part in a community health clinical as an undergraduate nursing student. As she spent time in a hospital, she saw pregnant women dealing with hypertension.

“From what I saw in the community, a lot of people that we saw, they came in with heart palpitations and uncontrolled hypertension,” said Avorgbedor, who previously worked as a postdoctoral trainee at UNC Chapel Hill. “It was very prevalent in the community.

“Disease conditions we see in the hospital are a reflection of what exists in the community. Most women will get pregnant, at least once, in their lifetime. Giving birth to another life should not cut one’s life short. Hopefully, research in this area can make a difference.”

Epstein felt for the patients she came across while working in a psychiatric hospital early in her career as a nurse.

She saw their suffering and the toll their mental illnesses took on their families.

Epstein worked with one patient in particular who had serious developmental issues because of his mother’s alcohol and drug use while pregnant with him. As it turned out, the patient’s mother had used alcohol and drugs to cope with her own difficult life.

“This got me thinking about the effects of extreme chronic stress on women’s physical, emotional, and behavioral health during pregnancy,” Epstein said. “The ways in which a mother’s experience could be passed on during pregnancy to affect the next generation seemed like a very important and potentially impactful area of study.”

Epstein was excited to bring her research on the long-term effects of stress on pregnant women to UNCG after completing a postdoctoral fellowship at the University of California San Francisco. She joined the School of Nursing as an assistant professor.

Research has shown the stress that individuals experience in childhood can get “under their skin” in a biological way and persist into adulthood. Epstein recently published an article stating pregnant women who grew up in stressful childhoods had significantly higher cortisol levels during pregnancy than women who had experienced less tumultuous upbringings.

Cortisol, the primary stress hormone, helps regulate mood, energy balance, and sleep, as well as performs other functions in the body.

“Furthermore, stressed women tended to experience depression at much higher rates, which also affected levels of stress hormones,” Epstein said. “It remains to be determined exactly how these biological changes in women affect the health of women and their babies. However, it is known that cortisol can affect a baby’s growth and development in utero, particularly the brain.”

Epstein said the coronavirus pandemic has led her to expand her research. Women are experiencing a new set of stressors because of the pandemic, including unemployment, food insecurity, school closings, social isolation, domestic violence, and the death of loved ones.

“The psychological and emotional toll of the pandemic will continue for a long time,” Epstein said. “Given this, I think there is a real need for action-oriented research to help address the stressful aspects of the situation, especially for pregnant women and mothers.”

McGovern was working as a school nurse in Columbus, Ohio, when she realized that many of the students she treated were struggling to simply cope with life’s challenges.

Some of their parents were in “survival mode,” either battling substance addiction or too distracted with other priorities to give their children enough support at home.

McGovern found herself teaching coping skills to students in addition to her regular duties as the school nurse. She decided to pursue a PhD to help children on a larger scale, specifically kids with asthma who don’t fully understand the challenges they’re facing.

Research indicates children with asthma and anxiety or depression tend to experience more issues with asthma. As a result, children may be able to control their asthma more by learning coping skills and proper ways to manage their condition.

“I experienced a lot of trauma in my own childhood, which included the loss of my parents at different ages, and I worked really hard to get to where I am today,” McGovern said. “I want to be of service to others, and I want to help children especially understand that they can survive and thrive even when they experience difficulties.”

McGovern joined the School of Nursing as an assistant professor after working as a postdoctoral fellow at UNC Chapel Hill. Her research focuses on the ways that children between ages 8-12 cope with having a chronic physical condition, such as asthma.

McGovern said asthma is often misinterpreted in children as a symptom of anxiety. On the flip side, stress and emotional reactions can trigger asthma.

McGovern works with small groups of children to teach them theoretically based coping skills and how to manage their asthma, with the goal of improving both their physical and mental health.

“They don’t know what actions to take to manage their symptoms. They may not understand asthma as a chronic condition, so I wanted to get to them before they really get through puberty and adolescence.”