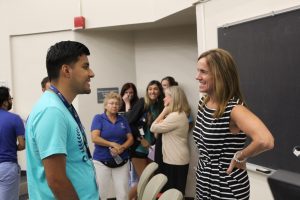 Britt Flanagan wore a black face covering and black latex gloves as she grabbed one cardboard box after another off a long row of tables.

Cars, trucks, and SUVs slowly made their way through a parking lot and stopped once they reached Flanagan, the student success coordinator for the UNC Greensboro School of Nursing. Wearing a blue “UNCG” tank top, she greeted drivers, said hello to their children, and helped load the boxes full of meat and produce into their vehicles.

Flanagan regularly volunteers with Out of the Garden Project, a nonprofit organization that strives to address food insecurity in the Piedmont Triad. She’s on a first-name basis with the organization’s staff – in much the same way she recognizes the undergraduate students she advises whenever they cross paths on UNCG’s campus.

“I like taking on projects. I like helping people that don’t have as much opportunity as I’ve been given in life,” Flanagan said. “I feel like the people who are there getting the food are very appreciative. I’ve created a relationship with some of the volunteers that are there every time I go back.”

Flanagan has taken on several official roles and a few unofficial ones since joining the School of Nursing in 2014. She’s an advocate and a sounding board for the approximately 250 students she advises at any one time.

Flanagan is co-chair of the Change Champions, a small group of faculty and staff members that works to promote a positive culture in the School of Nursing. She’s also entering her fourth year as a member of UNCG’s Staff Senate.

As co-chair of the Staff Senate’s service committee, Flanagan encourages colleagues across campus to volunteer and donate to good causes. Last December, the storage room across from her office on the first floor of the Margaret C. Moore Building was filled with new bicycles she got for local children to receive on Christmas.

As if that weren’t enough, Flanagan is on the board of the Greensboro chapter of Females in Action, an organization that seeks to empower women through weekly workouts, community service, and fellowship.

“Early on, the students get the sense that she’s more than just giving them their advising code and their classes. She truly cares about their academic career here at UNCG. So, she’s very supportive and a lot times just a listening ear, a shoulder for them to kind of confide in.” – Philip Simpson, director of students affairs for the School of Nursing

Flanagan discovered a passion for helping people with developmental and mental disabilities while in college. After earning a master’s degree in rehabilitation counseling from UNC Chapel Hill, she worked for several years as a case manager in the private sector and for Randolph County Mental Health.

At the time, there were discussions about closing the Dorothea Dix psychiatric hospital in Raleigh. Flanagan worked to deinstitutionalize patients with developmental and mental disabilities and help them become more self-sufficient in the community.

“I don’t know if everybody would agree, but most middle children I know are very independent, and I happen to be very independent,” she said. “So, that was a real strength when I was working with these individuals where I wanted them to be as independent as possible. I just really loved working in that environment.”

Nursing students jokingly refer to Flanagan as the “mom” of the School of Nursing, and they often come to her for support and a little mothering when it’s needed.

Chelsea Carmon admitted she was heartbroken a few years ago after it seemed her plans of being admitted into UNCG’s bachelor of science in nursing (BSN) program had fallen apart. She immediately rushed to her “safe place” – Flanagan’s office.

Carmon had formed a close bond with Flanagan, who was her academic advisor. As they sat together, Flanagan assured Carmon that everything would be OK, even if Carmon would have to wait another year to apply to get back into the BSN program.

“Over the course of weeks, she worked with me, giving me options to add on a minor, become involved in campus, volunteer, anything to occupy my time until it was my time to shine and prove that I could be given a seat in the nursing program again,” said Carmon, who graduated in May with her BSN and now works as a nurse at Atrium Health Mercy hospital in Charlotte.

“I wholeheartedly mean this when I say I would not be as strong as I am and where I am today without the guidance and encouragement of Britt Flanagan.”