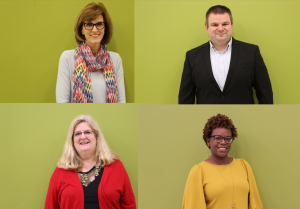 Dr. Julie Kordsmeier, Dr. Vadim Korogoda, Dr. Lori Lupe, and Aimee Motley joined the UNC Greensboro School of Nursing as clinical faculty members. Read below about what led them to their decisions to work with nursing students.

As a kid, Kordsmeier often visited her grandmother, Juanita Adkins, at her job as an emergency room nurse.

Adkins was already a mother when she decided in the Sixties to go back to school to become a registered nurse. Her kindness, especially for people in her community who had difficulty getting access to healthcare, made an impression on Kordsmeier.

“I actually went down to the hospital to see her, so I knew. She loved it,” Kordsmeier said. “She loved the emergency room at that time and loved caring for people, and I grew up with that.”

Kordsmeier comes from a family of nurses. Her aunt, Jean Lambert, worked as a nursing house supervisor and showed Kordsmeier the qualities needed to be a leader in the workplace.

Kordsmeier spent a semester as a research assistant in the School of Nursing in 2004 before being hired as a clinical instructor later that year. She taught at UNCG until 2015, when she left to concentrate on earning her DNP degree from Vanderbilt University.

Once she completed her doctoral program in 2018, Kordsmeier said she hoped to rejoin the School of Nursing faculty. She has a passion for working in primary care and showing her AGNP students that something as overlooked as oral health can let them know about a patient’s overall health.

Korogoda considered a career as a nurse practitioner, but a second cousin who’s like an uncle to him was studying at the time to become a certified registered nurse anesthetist (CRNA).

“I didn’t know about being a CRNA, and they refer sometimes to CRNAs as the best kept secret in healthcare,” Korogoda said. “I actually never got exposure to it in nursing school, but through him I got exposure to that.”

Korogoda ended up listening to his “Uncle Andre.”

After almost six years as a nurse in an intensive care unit (ICU), Korogoda went back to school to become a CRNA, which gave him the opportunity to serve in an advanced practice role and provide direct care to patients.

Korogoda has worked as a nurse anesthetist since 2015, but he has always had a knack for teaching. He helped friends study, tutored other students in math and science when he was in nursing school, and mentored younger nurses while working in the ICU.

Korogoda has brought his hands-on approach to teaching to the School of Nursing as a clinical assistant professor in the DNP program’s concentration in nurse anesthesia. He’s teaching courses on physics and the equipment that CRNAs use to administer anesthesia to patients.

“I seem to be able to explain things in a way that people can understand,” said Korogoda, who keeps up his clinical skills working one day a week as a CRNA at High Point Medical Center. “Sometimes they wouldn’t understand it from the lectures in class, and I was able to explain it to them. So, I always enjoyed that teaching aspect.”

A few years ago, the DNP program director at the University of Buffalo spoke to Korogoda about him teaching on a part-time basis. Korogoda initially had reservations because he was a recent DNP graduate from Buffalo, but he agreed to join the faculty.

“With his advice and his mentorship, I was able to make that transition,” Korogoda said. “He encouraged it and I greatly respected his opinion, and I knew he wouldn’t tell me to do something if he didn’t think it was a good idea.”

It’s a balancing act that Lupe has become accustomed to throughout her career. At one time, she taught in all the nursing programs at the University of Miami.

Lupe now serves a dual role in the School of Nursing as a clinical professor and the interim DNP program director. Depending on the day, she works with either students who are about to start their nursing careers or experienced nurses who have gone back to school to become leaders in their organizations.

“I love both groups. I love what I do. I love teaching,” Lupe said. “I love watching the undergraduates get it and put all the pieces together, especially in their senior year. And I love working with the DNP students because they’re out there and they know what the issues are, and I’m helping them to develop the tools to learn how to address those issues and fix them.”

As the oldest of three children, Lupe helped take care of her mother, who had asthma. She decided in the sixth grade to become a nurse, and she was the first member of her family to graduate from college when she earned her bachelor of science in nursing (BSN) degree from the University of Toledo.

Lupe worked primarily as a nurse in an open-heart ICU before moving into leadership roles. While in graduate school to become a more effective nursing administrator, she discovered a passion for teaching.

There have been times during Lupe’s career when she taught a BSN student who, after asking her for a letter of recommendation, went on to graduate school, became an advanced practice nurse, and now holds a leadership position like she did.

“It’s awesome,” Lupe said. “There’s just so much pride in them and their accomplishments.”

Motley had the same clinical instructor and mentor throughout her time in nursing school, so she knew what to expect during her clinical rotations at CaroMont Regional Medical Center in Gastonia.

Ann Hart, Motley’s clinical instructor, typically assigned lots of homework and required the 10 nursing students she oversaw to conduct large projects. She also liked to test her students when they were standing at a patient’s bedside to see if they knew what they were doing.

Now that Motley is a clinical instructor herself, she tries to hold her students to the same high expectations that Hart set for her – though she doesn’t assign nearly as much homework.

Motley joined the School of Nursing faculty on a full-time basis after she saw the impact she had while working as a part-time clinical instructor during the Fall 2019 semester.

At first, she noticed many of her junior nursing students were timid during their clinical rotations at Moses Cone Memorial Hospital. As the semester progressed, though, her students felt more comfortable entering a patient’s room and doing a physical assessment on their own.

“So, by the end of the semester they’ve built that confidence,” Motley said, “And to know that, hey, I had a hand in that or that I helped them get to that point was really reassuring to me.”

Motley spent almost six years treating patients with heart issues on a hospital’s progressive care unit before taking a position as a case manager at Wake Forest Baptist Medical Center. Along the way, she met UNCG clinical instructor April Pearson, who introduced Motley to the idea of teaching students.

“My grandmother jokes with me all the time, saying that I achieved her dream because she always wanted to be a nurse,” Motley said. “It feels good knowing that I make my grandmother proud by fulfilling her dream as a nurse, but I am also proud that as a nurse I get to inspire and help others fulfill their dream.”